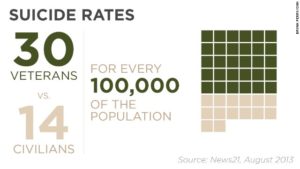 The Heroes Ride is dedicated to educating the public about Veterans Suicide.  As one of the two major components to the mission, it is imperative that the Heroes Ride works with Veterans within the communities across the state to promote the resources that are available to veterans who are suffering.

United States military veteran suicide is an ongoing phenomenon regarding a reportedly high rate of suicide among U.S. military veterans, in comparison to the general public. According to the most recent report published by the United States Department of Veterans Affairs (VA) in 2016, which analyzed 55 million veterans’ records from 1979 to 2014, the current analysis indicates that an average of 21 veterans a day die from suicide.

In 2012 alone, an estimated 6,500 former military personnel died by suicide. More active duty veterans, 177, succumbed to suicide that year than were killed in combat, 176. The Army suffered 52% of the suicides from all branches.

In 2013, the VA released a study that covered suicides from 1999 to 2010, which showed that roughly 21 veterans were dying by suicide per day, or one every 65 minutes. Some sources suggest that this rate may be undercounting suicides. A recent analysis found a suicide rate among veterans of about 30 per 100,000 population per year, compared with the civilian rate of 14 per 100,000. However, the comparison was not adjusted for age and sex.

The total number of suicides differs by age group; 31% of these suicides were by veterans 49 and younger while 69% were by veterans aged 50 and older.  As with suicides in general, suicide of veterans is primarily male, with about 97 percent of the suicides being male in the states that reported gender.

There is help available.  The Veterans Suicide Prevention Hotline is one of the support mechanisms that can be utilized if help is needed.  But it is not the only one.  The Highground offers veterans retreats that allow veterans to spend time together.  It has been shown that Veterans who have the ability to work with other veterans who have suffered from the effects of the costs of war have had a better chance to survive the issues that they are dealing with.  It is the support of the veteran to other veterans that brings about the connection that help with the healing process.

Please donate to our cause to help facilitate some of the retreats, and other programming that The Highground Veterans Memorial Park offers to our veterans and their families.  If you need help please, please contact the Veterans Suicide Prevention Hotline, at 1-800-273-8255 or contact our Events Coordinator to get signed up for one of the many retreats, or other opportunities that help veterans at events@thehighground.us

Help us support those in need by donating to our cause by clicking here!